JoinBase is an end-to-end database database for IoT. With it, you can do top performance real-time analytics over massive IoT device's bigdata deluges at an extremely low cost in one stop.

Get started in three minutes!

In this article, JoinBase and interesting peers (Timescale and ClickHouse now) will be benchmarked.

Since there is no suitable benchmark program to bench the new end-to-end database for IoT, we built an open source project for benchmarking ourselves. This is, just the "Open IoT Database Benchmark Suite" (OIDBS), which we have open-sourced into the community.

The core of OIDBS is the benchmark model, which is used for grouping different benchmark dataset and its corresponding data-gens, schemas, queries.

In the first launch of JoinBase and OIDBS, two models - 'nyct_lite' and 'nyct_strip' are benched:

These two models are derived from official, real-world New York city dataset. The nyct_lite is relatively small dataset, but it is exactly what Timescale uses to demonstrate its application in the IoT field.

The importance of nyct_lite model is that:

The nyct_strip could be seen as the bigdata version of nyct_lite. We extract 1 billion rows and 7 representative columns from the around 1.7 billion rows and 27-column original schema to form a stripped dataset. The size of the original is too large to reproduce (compressed 600GB+ csv). For users, it makes non sense to claim that any result on non-reproducible dataset.

The importance of nyct_strip model is that: the big data scenario is the standard situation for most IoT businesses.

Tab.2 Setup for the benchmark

Timescale and ClickHouse are selected as the comparing group in this benchmark. We think these two are the representative DBMSs in TP and AP fields respectively. Indeed, many other products that claim to outperform these two. But based on our testing or knowledge, we don't think they deserve to be included in this benchmark.

By comparing with these two state-of-the-art DBMSs, we hope to show interesting and profound conclusions, and finally why JoinBase is the unique product to cover the full payload spectrum for IoT domain in the world.

AWS m6a.16xlarge instance uses AMD 3rd generation EPYC CPU. We think it is relatively modern hardware. However, the vCPU counting of m6a.16xlarge is quite restrained in that the upcoming Zen4 based EPYC will have up to 256 hyper-threads.

C-states and Turbo Boost have been disabled in the formal benchmark. The c-states switching and boosting causes obvious run time fluctuations. Furthermore, in a highly concurrent production environment, there is no possible to boost for busy cores unless your software much under-utilize the CPUs. The boosting is just one pitfall of the micro-benchmark, which could be seen in benchmarks before.

Last, we use the latest available versions of all softwares to make sure all benched peers are in the officially best condition.

The write side benching should be one of the most interesting bench points. However, due to that there is no true IoT messaging native domain database except JoinBase. An apple-to-apple comparison can not be done, indeed.

Here, we just give out the world record level performance data of JoinBase and some observations on other benched dbs.

Tab.3 Setup for the benchmark

The most exciting thing is that, JoinBase importing uses the MQTT based one-by-one messaging. One-by-one messaging capability is a unique IoT domain demands, and should a must for any database call itself "database for IoT". Any client-side batching mechanism comes at the cost of increased latency and thus increased risk of unresponsiveness, which should be unacceptable for IoT users.

In our internal stress, 8.4 million messages/s sustained throughput in one-by-one message (a.k.a. batch size = 1) importing can be achieved in JoinBase. Although Timescale also has a good result when batching enabled in client (the timescaledb-parallel-copy tool here), the first version of JoinBase still crushes it with enough concurrency in one-by-one style.

The benchmark item to query latency is used for measuring the response time to a single query.

In the benchmark, we run three times per query and uses the best run time among three as the final result. It is nice to pick up the best result because a system may need some warmups for queries, e.g. cache, decompressing. Pay attention that we are benching serious DBMSs for massive data not in-memory toys.

For 10-million-row level nyct_lite model, 8 queries has been proposed. Among of them, both the seventh and eighth queries are taken as-is from Timescale itself's document - Introduction to IoT: New York City Taxicabs. (All other queries in this document are multi-table queries a.k.a. joins. We will add these queries to the benchmark in the near future when JoinBase's high performance join implementation coming.) See more detailed SQLs in our OIDBS source.

Tab.4 Queries in the `nyct_lite` model

Jump to the result! 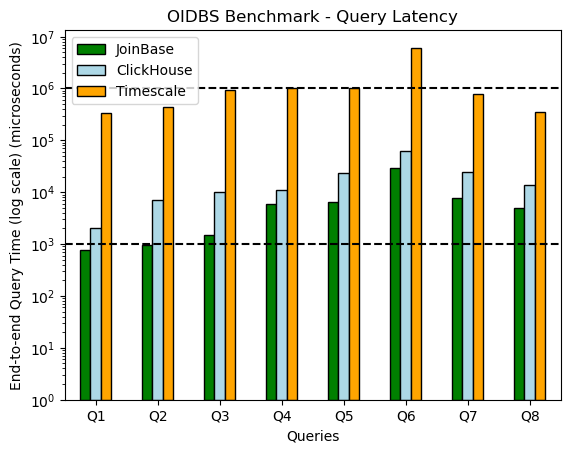 Fig.1 is the query latency benchmark results for nyct_lite. We use the log scale in end-to-end query time(y axis) because the gap is 2 to 3 orders of magnitude! The specific ratios of the query time to that of JoinBase are shown in Tab.5. Additionally, two lines are put at 1 millisecond and 1 second for better quantitative understanding. Let's just summarize the exciting in results:

For 1-billion-row level nyct_strip model, 6 queries has been proposed. Although the nyct_strip model has fewer columns than that of nyct_lite, these queries are still tweaked from nyct_lite.

Tab.6 Queries in the `nyct_strip` model

The benchmark process of the nyct_strip model is same to the nyct_lite, except that we use the different dataset and query set.

Go to the results: 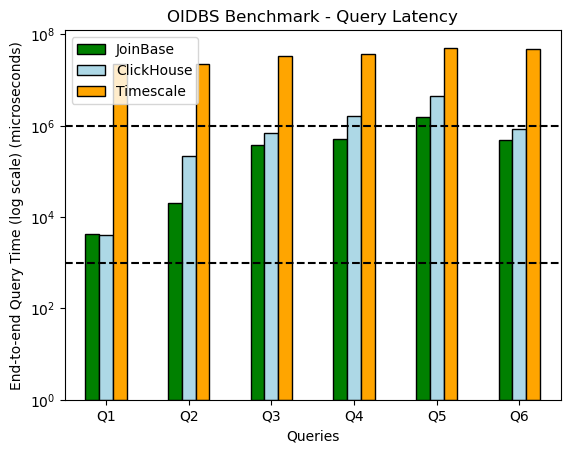 The nyct_strip 1-billion-row dataset are more challenging, but when our IoT devices scale out, we have to face.

The benchmark item is for measuring how many the alert trigger queries to recent data can be completed per second.

This benchmark item is very exciting to demonstrate the uniqueness of JoinBase. When IoT devices scale, not only the incoming data goes big, various types, locations, measurements of data come in as well. In other cases, for the big enterprise or organization, kinds of queries to recent small data set will aggregated. Users always want to customize many alert trigger queries for the latest data. Note, for this case, the caching trick is useless, because the recent data is always changing in production and we want to know the newest result as possible.

For simplicity, we propose a specific alert like query to use the latest time period as the query interval, like this:

In this query, an interesting extension of JoinBase to ansi-SQL is shown. It is called where parts clause, which lets users to specify explicit partitions to the query. More details about partition and where parts could be seen in the documents. Because the nyct_lite dataset (from Timescale) has a very tiny tailing data happens in 2017, we use the latest data interval in 2016, that is half of the day in 2016-01-31.

This query imitates an alert query to report the counting of anomaly trips in the latest half of the day, here is of those the total_amount less than zero.

Go to the result: 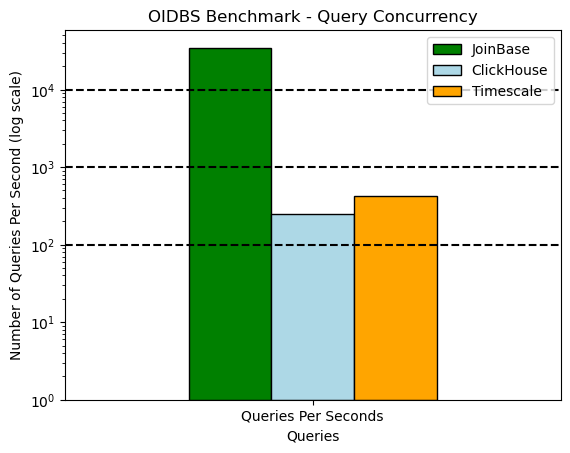 As we can see, the QPS of JoinBase is two orders of magnitude higher than that of Timescale and ClickHouse. JoinBase's custom query path is so incredibly fast that it can complete 34k lightweight adhoc aggregations for recent data in a modern mid-range box. Even TP databases (see Timescale) are far from beating, not mention the AP system (ClickHouse).

Some interesting things which can not be included in the first release of JoinBase, due to the implementation or time limit.

JoinBase is creating an unprecedented, user-oriented, end-to-end database for IoT:

Finally, welcome to request the JoinBase Enterprise for free.